Around the streets of Key West, you’ll hear as many legends of Captain Tony’s Saloon as there are about Captain Tony himself.

The famous Key West local, Captain Tony, was a known storyteller and may have created many of these legends himself as he held court in the saloon every night. We’re sharing the stories that we like to think are equal parts Key West history and island hearsay. 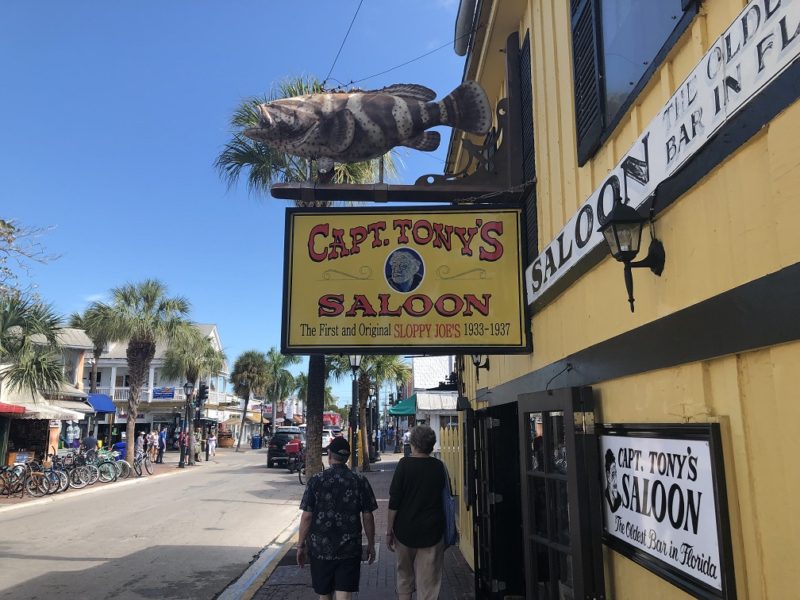 Depending on who you ask, the building at 428 Greene Street was built in 1851 or 1852, and it originally held two businesses. It was an ice house getting it’s supply from ships sailing up and down the Atlantic Coast, and as the only frigid place on the island, it was also the city morgue. Some say that Key West never had a morgue, but the story of what happened during the storm of 1865 would beg otherwise. 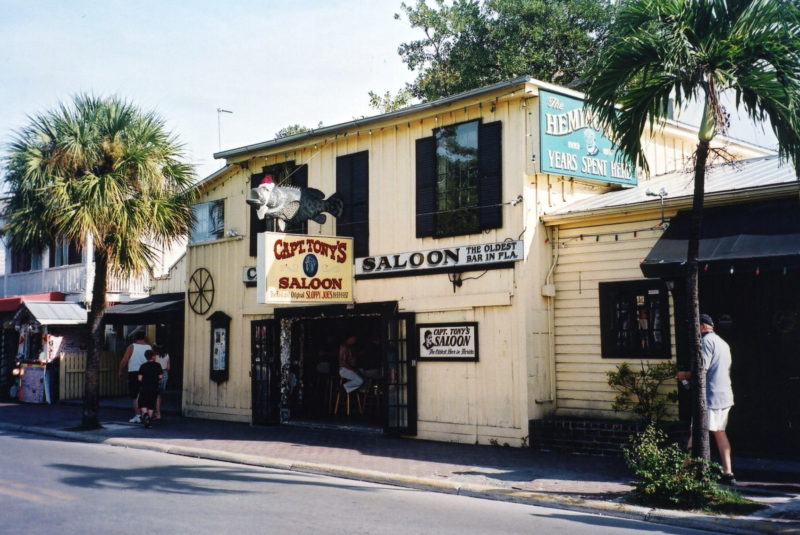 In the summer of 1865, there was a horrendous hurricane, causing water to pour through the island of Key West, nearly destroying everything in its wake. It’s said that the storm surge was over 20 feet. The bodies that were awaiting burial or autopsy were washed away in the surge, except for one body that was later buried beneath the building. A wall was built around the remains and surrounded with holy water. 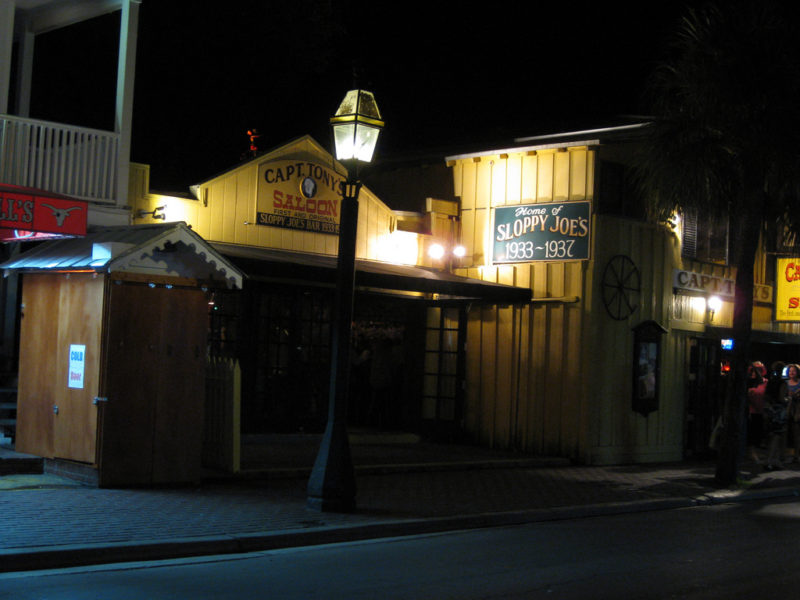 In the 1890s, the building housed a wireless telegraph station, and during the Spanish-American War in 1898, it was from this building that the news of the destruction of the battleship Maine was sent around the world. In 1912 it became a cigar factory, and later a bordello. At some point, it was a bar that encouraged patrons from the Navy, until the Navy declared it off-limits. It later became several speakeasies, the last of which was called the Blind Pig, specializing in gambling, women and bootleg rum. 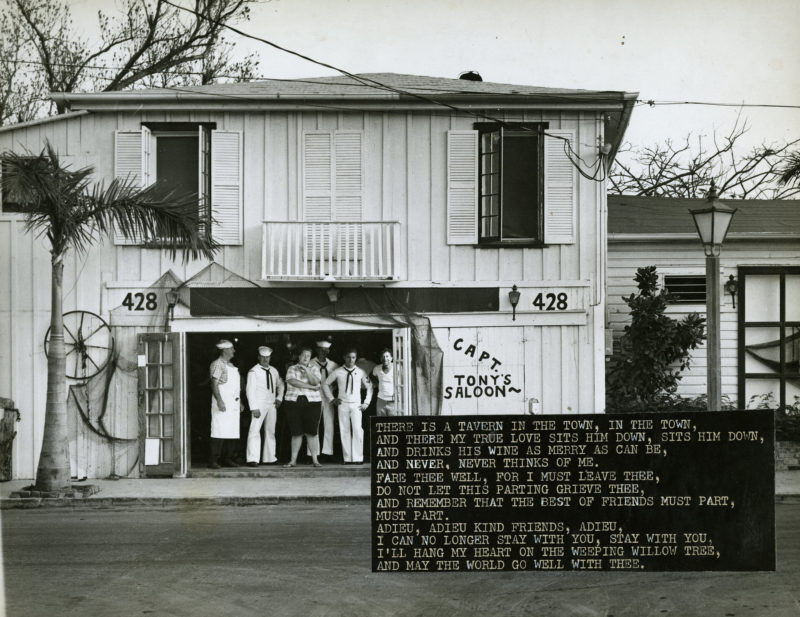 During prohibition, Josie “Sloppy Joe” Russell, a local entrepreneur and one of Hemingway’s cronies, took out a lease on the place with hopes for the end of the drinking ban in near sight. Sure enough, in 1933, Sloppy Joe’s bar was opened and it was here that Ernest Hemingway spent many of his evenings from 1933 to 1937. 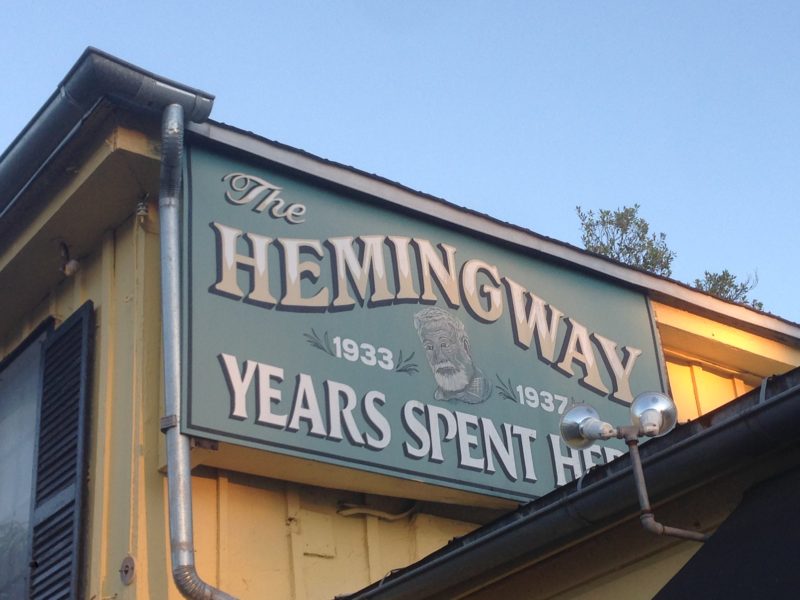 In 1938, the building’s landlord raised the rent by a dollar a week, and Russell retaliated. He marched up the street and secured a lease for 201 Duval Street where Sloppy Joe’s bar still stands today. The story goes that the bar patrons picked up their stools, their cocktails, and the liquor bottles, and walked the few short steps across Duval Street to the new Sloppy Joe’s location. Not a drop was spilled! 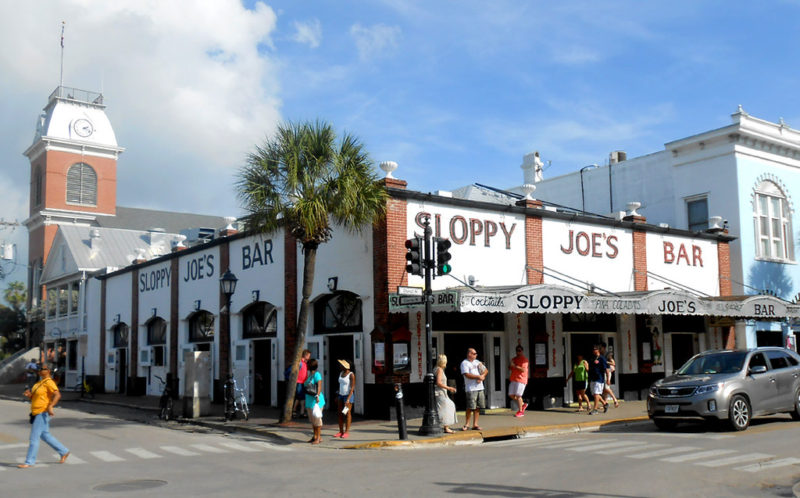 Hemingway claimed ownership of the men’s urinal, saying that he had paid a fortune to water it over the years. He moved the urinal it to his home a few blocks away on Whitehead Street. He won the argument with his wife, Pauline, to keep this souvenir, and the urinal found its permanent use as a fountain for the polydactyl cats whose ancestors still live on the grounds of this home. 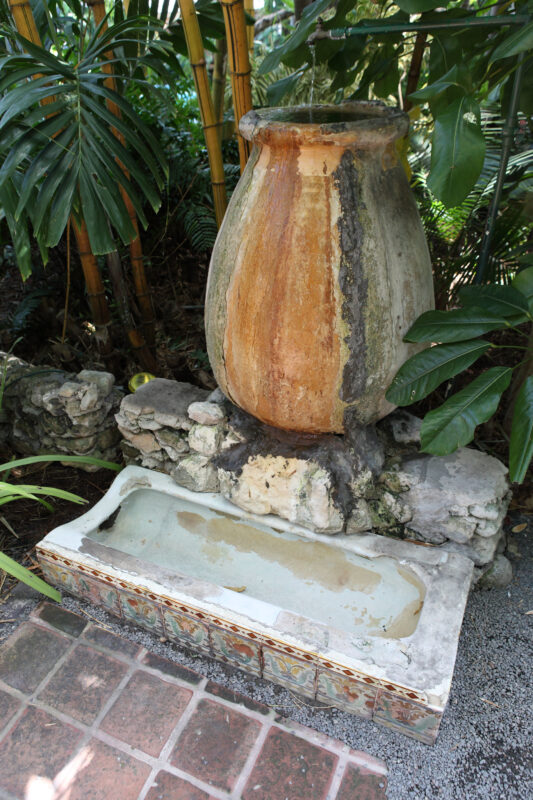 The bar went through several incarnations until Captain Tony Taracino, a well-known local charter boat captain, purchased the building in 1958 and named the saloon after himself. Some say the legends of this site were created by Captain Tony, a colorful storyteller and man of many wives and even more children. Still, visitors may sense an eeriness about the building that holds so much history and Key West flare. The dimly lit saloon is decorated in license plates, kitchy dollar bills, ladies bras, and business cards from visitors around the world. 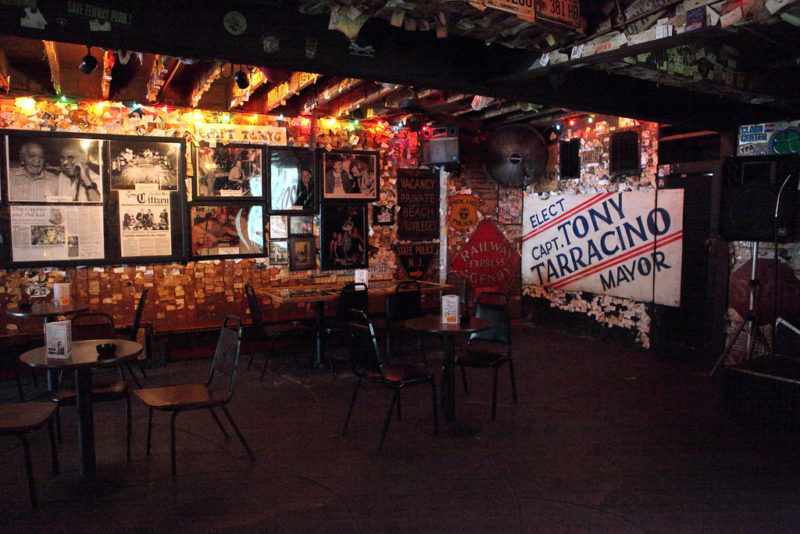 Among the other funky decor, don’t miss the large tree growing through the center of the bar. Known as the Hanging Tree, rumor is that 18 people were hanged there, all but one for piracy. The one exception was a local woman who was said to have killed her husband and two sons and then left their bodies in her yard. A neighbor saw the horrifying scene and sent police to the home. The woman was found in her house wearing a blood-soaked blue dress, and taken to this tree for immediate hanging. She was thereafter known as the Lady in Blue and many have seen or photographed blue specters in the bar that they say prove the Lady in Blue haunts the building. 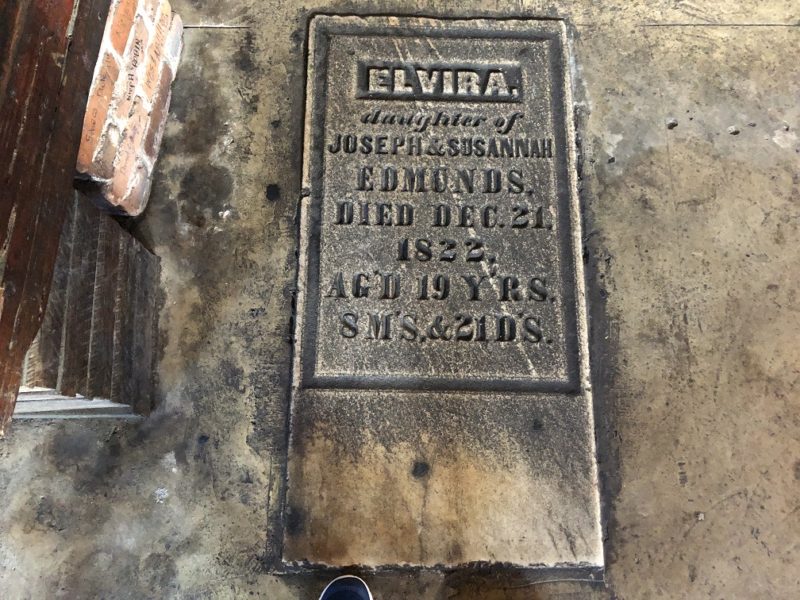 In the 1980s, renovations of Captain Tony’s Saloon were underway when construction workers found the bones of about a dozen bodies under the flooring. They also unearthed a gravestone for a young woman named Elvira, which remains on the floor of the billiard room. Bar patrons guess there may be more undiscovered skeletal remains under the floor, perhaps bodies lost in the hurricane of 1865. 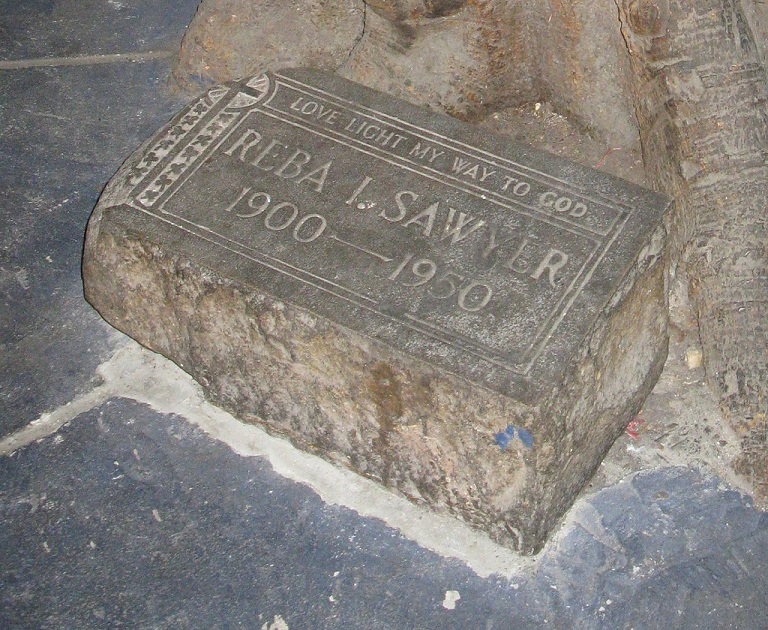 Elvira is not the only woman whose gravestone is featured at Captain Tony’s. You will find the burial marker of Reba Sawyer right underneath the Hanging Tree. The story goes that Reba was originally buried in the Key West cemetery after she died in 1950. Her husband later found letters that exposed an affair between his wife and another man. They had their trysts at Captain Tony’s Saloon. The husband was so enraged that he dragged his cheating wife’s gravestone from the cemetery into the bar and placed it under the Hanging Tree, shouting, “Here is where she wanted to be. Here is where she will stay.” Some say that Captain Tony placed both Elvira and Reba’s gravestones in his bar and, over the years, embellished each story. You decide! 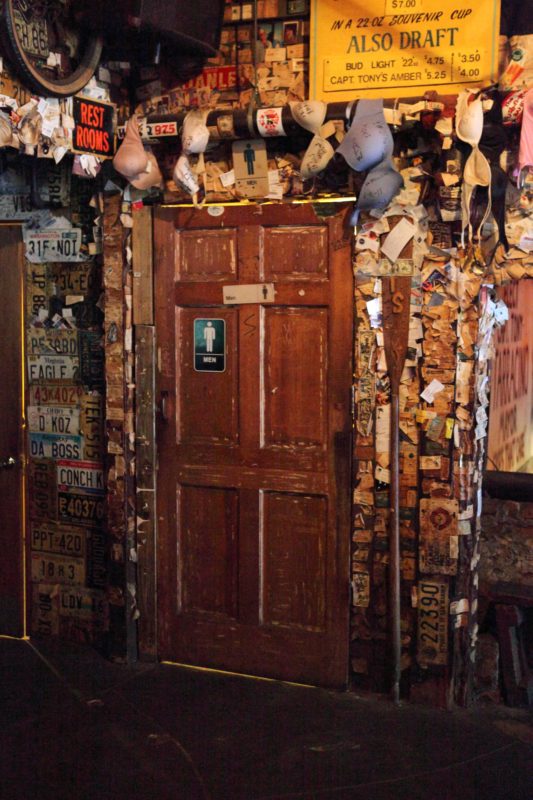 With all the horrific stories of its past, Captain Tony’s Saloon is still a booming bar and must-see place to party in Key West. Captain Tony had a great appreciation for the musicians and writers who came into the Saloon during its early days. One of those musicians, in the early 1970s, was a young man named Jimmy Buffett who often played the bar for a few drinks of tequila. Buffet went on to immortalize Key West, Captain Tony, and the saloon in song after he rose to worldwide fame.

Many, many famous artists took the stage during Tony’s tenure, including Key West’s own Shel Silverstein and even Bob Dylan. Writers, broadcasters, artists, actors and musicians have all been attracted by the charm of the saloon and after their visits, their names were painted on the stools surrounding the bar. Captain Tony’s Saloon continues its great music tradition today with live performers every afternoon and evening. 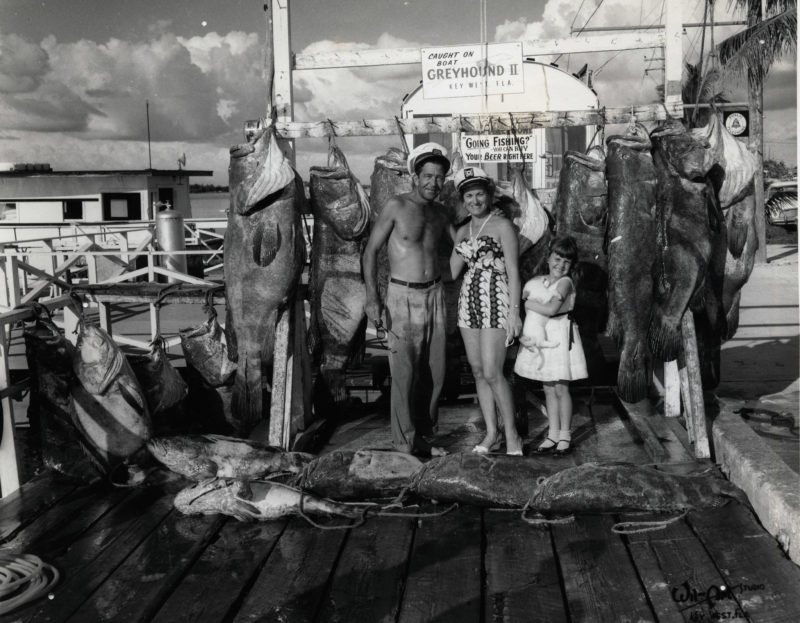 Captain Tony Tarracino with his wife and daughter and a catch made on Greyhound II September 9, 1958. Photo by Wil-Art Studio. Photo courtesy of Flickr, Key West Public Libraries

In 1989, after Captain Tony was elected mayor of Key West, he sold the bar but continued to hold court there every Thursday night until he passed away in 2008. The current proprietor calls himself a skeptic, but even he is on record as having experienced a few ghostly encounters in the Saloon. Whether the stories of this bar are true or fabricated, Captain Tony’s remains a part of Key West history — full of characters, culture, bravado, music, kitsch and ghost stories.

Ready to check out Captain Tony’s Saloon for yourself? Check our availability at Old Town Manor & Rose Lane Villas here.