We’re pretty sure you’ll agree that a cold beer on a hot day is just what the doctor ordered.  And what could be better than one cold beer?  How about an entire festival of beers, lasting 5 days, in Key West??  No, you aren’t dreaming!

The 4th Annual Key West Brewfest begins Thursday, August 28th and lasts all Labor Day weekend.  Beer lovers unite in the Southernmost city for beer pairings, beer schools, a beer competition, beer festival, beer dinners and much more.  Events start at 8am Friday, August 29th (yes, we said 8am!) and last all night (or morning if you’re a gifted beer drinker like us locals).

Each event is special in it’s own way, and we’re especially excited about our annual Local Home Brew Head to Head Competition to be held on Thursday, August 28th from 6-8pm. Tickets are $25 + tax and include unlimited beer tastings from the Key West B.U.B.B.A.’s: Brewers United Brewing Better Ales.  It’s simple: drink, vote for the winning brew, then drink some more. Previous winners include mint chocolate chip, apple pie cider (it really is as good as it sounds), and the fan favorite, Queen Anne’s IPA. My personal favorite?  he apple pie cider.  It’s like a party in your mouth. Grab your beer goggles and call to reserve tickets at (305) 292-2170. 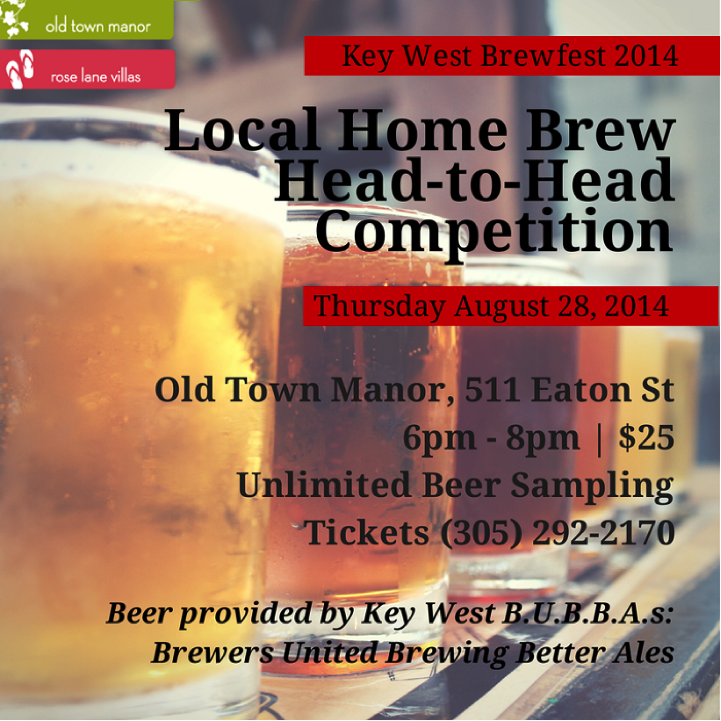 The star of the Key West Brewfest weekend is the legendary signature tasting festival at South Beach with over 150 beers and unique microbrews represented.  Sip and sweat on the beach with other like-minded beer fans for 3 full hours, or if you’re really hard core, get VIP status for another full hour of drink time.  VIP tickets also include some free swag and hand passed appetizers.  Score!

Click here, for more one of kind Key West events.